Selling the Volksempflänger to the public﻿ (1)

Back to Radio & Nazi Germany 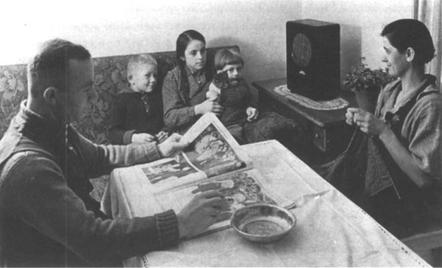 A German family listening to the People's Radio (2).

what did Goebbels do with the radio? 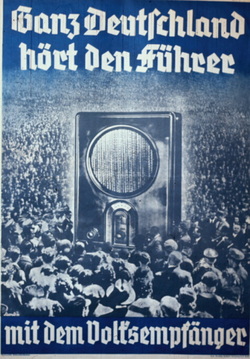 "All Germany hears the Führer on the People's Receiver" (3).
Radio was the future of propaganda for Goebbels. Unlike print or film, the radio was something that could reach the ears of the masses anytime, anywhere. It was something that could connect the German people directly to the words of Hitler and other leaders as if they were standing with the masses at rallies in real time. Indeed, for Goebbels, it was a means of bringing the Nazi government into the lives and homes the average citizen, bombarding them with a constant barrage of fiery speeches and emotional broadcasts effusing the Nazi perspective. It was through such constant infiltration into the daily lives of average citizens that Goebbels and the Third Reich hoped to build a community unified under a singular, and sympathetic public opinion.

Goebbels wasted no time. By 1934 the radio had unquestionably become “the voice of the nation” and the “principle propaganda medium” for the Nazi regime.[1] To ensure that everyone had access to a radio, Goebbels oversaw a massively subsidized manufacturing campaign of 75 RM and 35 RM radios called “Volksempfängers” (the people’s radio) that could be sold at historically low prices. Radios began to fill every home, and soon broadcasts of Hitler’s speeches could be heard coming out of homes in both city and rural neighborhoods alike. As part of this mass manufacturing campaign, the government also released  one of the most famous posters of the Nazi era (shown to the left) that centers an over sized Volksempfänger surrounded by thousands of people with a caption reading: “All Germany hears the Führer on the People’s Receiver.”[2]

In many ways, the poster was not too much of an exaggeration. In 1933 alone, over 1.5 million “people’s radios” were produced, skyrocketing to over 6 million sets in 1934, and filling over 70% of German households with radios by the beginning of the war—a percentage far above any other country in the world at the time.[3]  Believing that communal listening was imperative to building a unified following, Goebbels also invested a substantial amount to encourage local party leaders to design 'community centers' where people could gather to listen to speeches and broadcasts together.

As a result, the oncoming of speeches quickly became massive ordeals. As loudspeakers installed public squares, offices, schools, and even restaurants howled in siren, schools and businesses were put on recess and everyone gathered in public places to listen to the speech and take part in the “community reception.” Indeed, the usage of the radio had completely changed the way of life in Germany in the early 1930s. What was once available only to a small segment of the population, by 1935, had reached an audience of over 56,000,000 people who had become addicted to, and placed their faith in, “the voice of the nation.”[4]